Check back weekly for updates from Dick Beardsley on the fishing & outdoor reports. Find out conditions on different lakes in the area and how the fish are biting. 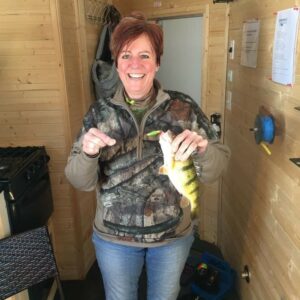 Snow, wind, snow, wind, bitter cold. That’s been the story here in the Bemidji area what seems like for the past month. Roads even on the bigger lakes are very limited and there are virtually none on the smaller lakes. Slush under the snow is also becoming more of a problem. Many folks have already pulled their houses off the lakes. A few walleyes have been caught early and later in the day on jigging spoons and minnow heads. The best areas have been the deeper humps and sharper breaks. Walleye/pike/bass closes Sunday at midnight but panfish are still an option but right now accessing area lakes is a problem. 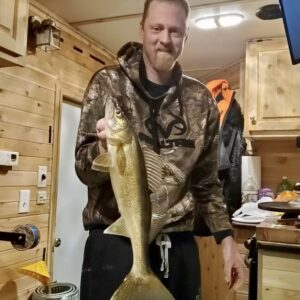 Not much if anything has changed since last week. More snow, wind, and cold temperatures have kept many anglers at home. There are a few walleyes going on Lake Bemidji and Plantagenet early and later in the day and you’ll find perch coming through in waves throughout the day. Some perch are being caught in 12′ or less while some are being caught deep. Jigging spoons and minnow heads are your best bet. Look to Midge, Beltrami, Gull, and Kitchi for some panfish action. 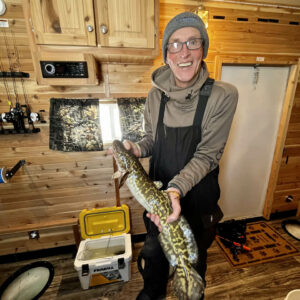 With cold temperatures, wind and snow last week it really cut down on the number of folks out on area lakes. Could be why some of the villages of fish houses have gotten smaller as people have pulled off their houses. Unless your on a snowmobile or a tracked vehicle don’t even think about getting off the plowed roads. There are some walleyes being caught early and later in the day on Lake Bemidji and Plantagenet with jigging spoons and minnow heads out on the deeper humps. The eelpout bite is also starting to pick up. Look to Gull, Beltrami, and Pimushe for some panfish action mainly in the deeper basins.

With a bit warmer temperatures last weekend it brought out more folks to hit the ice. The walleye/perch bite actually picked up and the fish seemed a little more aggressive. Jigging spoons and minnow heads produced most of the fish but dead sticking also was taking some fish. Look to Lake Bemidji, Plantagenet, and Andrusia fishing the deeper humps and sharp breaks. Gull, Beltrami, and Three Island lakes are kicking out some bluegills and crappies off the deeper weeds. There is more and more slush on area lakes and lots of snow so sticking to a plowed road is a good idea. 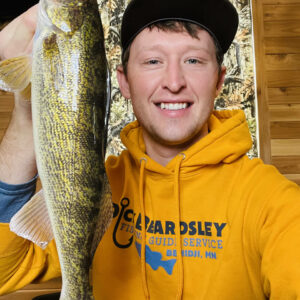 Very cold temperatures along with a few days of windy conditions limited angling activities here in the Bemidji area this past week. The perch/walleye bite has been a bit up and down with early morning and then late afternoon your best bet to ice some fish. Jigging spoons and minnow heads seem to be the ticket. Pounding the bottom with your spoon seems to help get their attention. There is a bit more slush out and about on area lakes this past week so unless you know where you’re going and have four wheel drive with high clearance I’d stick to the plowed road areas. Look to Lake Bemidji, Plantagenet, and Gull. Moose, Beltrami, and Turtle River Lakes are producing some bluegills and crappies. 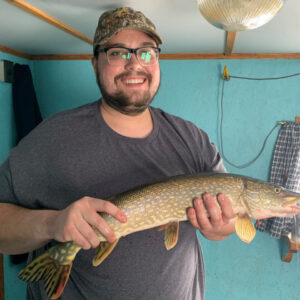 There are more plowed roads now on area lakes so that’s making accessibility better for folks to get out but if you get off the plowed roads four wheel drive is a must. There’s a short window in the early morning and late afternoon when the walleyes seem a little more cooperative. Jigging spoons and minnow heads along with dead sticking are producing a few walleyes on Lake Bemidji, Plantagenet, and Turtle Lake. Look to the break line in 12-18′ and deeper humps. The perch bite has been a bit slower this past week but you’ll have decent fishing on Lake Bemidji and Plantagenet. Look to Midge, Gull, Turtle River, and Beltrami for panfish. 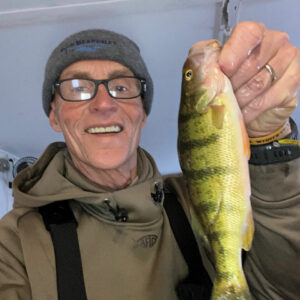 This past week in the Bemidji area we had very cold temperatures and a few days of wind which made getting around on area lakes very difficult unless you were on a plowed road which there are not many. The bite was pretty slow for the most part for perch and walleyes. With warmer temps this week hopefully the bite will pick up. Lake Bemidji, Plantagenet, and Andrusia are your best bet for some perch and walleyes. 18-30′ with jigging spoons and minnow heads. Look to Gull, Beltrami, and Rabideau for crappies and bluegills. 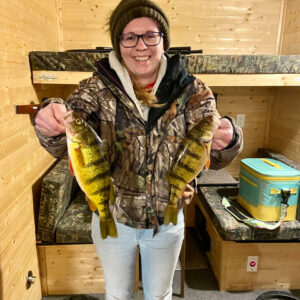 The Bemidji area received upwards of 20 inches of snow last week so if your venturing onto the ice with a vehicle four wheel drive is a must. Bitterly cold temps this past week have limited folks going out. The walleye/perch bite has been quite good on Lake Bemidji and Plantagenet. You’ll find some fish off the first break in 12-16′ and you’ll also find them on the deeper humps around 30′. Jigging spoons and minnow heads have been working best. Midge, Gull, and Moose Lake are kicking out crappies and bluegills off the deeper weed edges and the deeper basins. 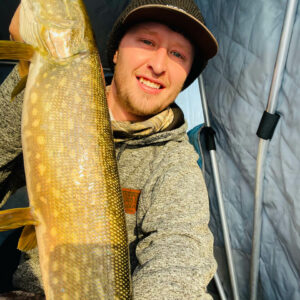 We’ve received a bunch of snow here in the Bemidji area the past few days which has limited folks getting out. Ice conditions on most lakes are good with close to 12 inches. Lake Bemidji ice is in the 10-11″ range and now with all the snow we’ve received there is starting be some slushy areas. Vehicles are starting to be used on some lakes but use extreme caution and know where your going. The walleye and perch bite has been good on Lake Bemidji in 12-18′ using spoons and minnow heads or dead sticking with a shiner. Lake Plantagenet is also kicking out walleyes. Look to Gull, Pimushe, and Moose Lake for crappies and bluegills. 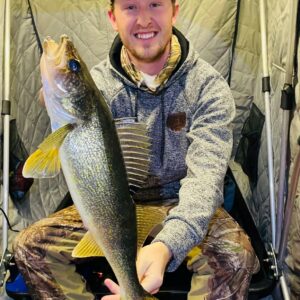 Most lakes in the area have 8-12″ of good clear ice. The exception as of earlier in the week is Lake Bemidji which has 7-8″. Snowmobiles, ATV’s, and Side X Sides are being used on most lakes to get out and about. The walleye bite has been pretty good early and later in the day on Bemidji, Plantagenet, and Gull. We are catching most of them off the first break in 10-16′ using jigging spoons and minnow heads. You’ll find perch some shallow and some deep on Bemidji and Plantagenet. Look for bluegills and crappies on Midge, Wolf, Pimushe, and Gull. I’m hoping to get my wheelhouses out on Lake Bemidji by this weekend. Rentals and guide trips are available. 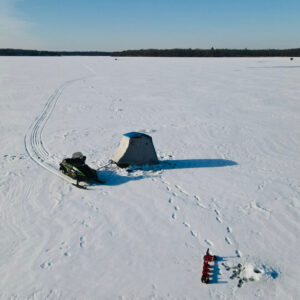 There is 8 to 10 inches of ice on most lakes in the area and snowmobiles and ATVs are being used to get out. The exception is Lake Bemidji, where anglers are walking out on 3 to 5 inches of ice. Look to Lake Irving, Grace Lake, and Gull Lake for walleyes in 10 to 12 feet, especially during the low-light periods. Little Turtle Lake and Campbell Lake are kicking out bluegills and crappies in less than 12 feet. 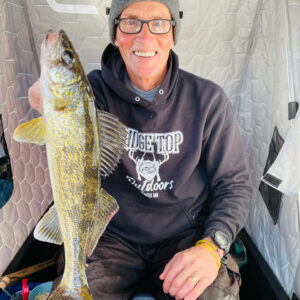 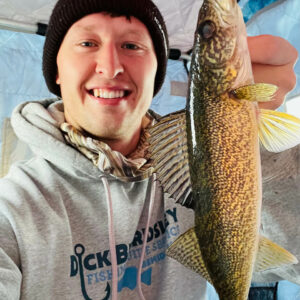 My good friend who also guides with me Brady Laudon and I got out on a Bemidji area lake Saturday to check things out. There was 5″ of good clear ice and the walleyes were on the bite! They pretty much went all day long and then about 4pm we started also catching crappies. They all went back except for a few walleyes for supper. Northland Forage Minnow Spoons and Buckshot Spoons with red glow stick and minnow heads were working well! We picked up about a foot of snow Sunday so if your venturing onto a lake make sure you check ice conditions. Luckily Lake Bemidji hadn’t completely buttoned up yet so no snow on top of a thin layer of ice. As I type this it’s -10 so the bigger lakes should be all froze up soon! As soon as we get enough ice on Lake Bemidji I’ll be getting my wheelhouses out, they are available for rental, Brady and I also do guide trips. Have a safe fun time on the ice and please remember to practice selective harvesting, by doing so we will continue to have great fishing for years to come!